Will TC and Jody Be in the Preacher TV Show?

T.C. and Jody are Jesse Custer’s bitch of a Grandmother’s minions. They basically do anything Marie L’Angelle asks them to do. In the issues 8-12 both TC and Jody piss off Jesse and Tulip enough to get their asses kicked – to death. This is an interesting story arc as it explains why Jesse became a Preacher. We will have much more on Marie L’Angelle or Jesse Custer’s grandmother.

END_OF_DOCUMENT_TOKEN_TO_BE_REPLACED

Preacher to Premiere in May 2016 on AMC

@justinwadewelch @preacher_on_amc We are in production now. Premieres in May, I think. Premiere is at SXSW in a few weeks

From a speculation and investing standpoint, if you plan on purchasing Preacher #1 you might want to do so before SXSW. If the pilot is as good as most are anticipating this series could be huge. We have no delusions of grandeur that it will be as popular as The Walking Dead but remember that Preacher had three times the following of The Walking Dead from a purely comic book fan audience.

There will be millions watching when it premieres, now we just have to wait and see how good it is.

Preacher Filming Wrapping Up in March 2016?

It looks like a number of the actors and actresses that were filming for the Preacher AMC TV series have mentioned they are leaving New Mexico. As we know, Seth Rogen and the team started filming in New Mexico in early February 2016. This was a tweet on February 26th, 2016 from the little boy that everyone has seen in the Preacher trailer:

On IMBD, it says that Chris Schenk, played by Thomas Barbusca, is only in the first episode of Preacher but we know IMBD has been a little bit slow to update some of the characters on this show. Over the next few days we will scour the web to see it any of the other actors or actresses have left New Mexico.

In less than two weeks the pilot will premiere at SXSW so maybe the first round of filming has been completed for the first five or six episodes? Only time will tell.

How Will Sheriff Root’s Suicide Scene Play Out on TV?

Well, this is going to be very interesting. After Sheriff Root pisses Jesse off one last time he says the following: 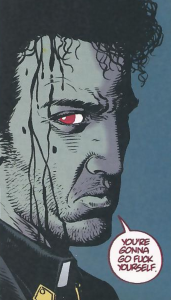 As we all know, what Jesse says actually happens. In the following scene we learn that Sheriff Root’s severed penis is struck in his colon. While in the ambulance he tells his son, Arseface, to get him a gun. After he gets the gun he shoots himself. This is when Arseface promises to avenge his father’s death by going after Jesse Custer.

It is one of the best scenes in comic book history. That said, how in the world is this going to play out on TV. First of all, we know that AMC cannot use the F word, so, there’s that. We also know there is no way they are going to put this type of scene in one of the first episodes of the show. At least we don’t think they will.

How will the Preacher TV show depict the suicide of Sheriff Root. We know Sheriff Root is in the show as his is played by W. Earl Brown. IMDB currently has Sheriff Hugo Root in all of the first 10 episodes of the first season. There is no way they can play out an entire season of television in four comic books so we obviously don’t get to see him commit suicide early on.

If this is the case, how will the character of Arseface play out? With his father still alive, there is no reason for him to seek revenge. There are many questions that are going to be asked about this show as it is quite obvious there are a number of important plot lines that are going to be changed completely.

How do you feel about Sheriff Root being in the entire first season? Do you think AMC should have tried to incorporated the suicide scene?

Joe Gilgun will play Cassidy and rumors are he steals the show in the pilot and much of the first season. For speculators and investors, Jesse, Cassidy and Tulip all appear in comic book #1 which is becoming harder and harder to find. In fact, the comic book could be well over $1000 for 9.6 copies and $2000 for 9.8 copies by the time Preacher is on AMC. Here is Joe Gilgun on Misfits:

Do you think Joseph Gilgun will be the star of Preacher as Cassidy? What else did Joseph Gilgun play in that you enjoyed? Please comment below and let us know!

Series Theme Song will Be Son of a Preacher Man

The opening credits will have this song by Dusty Springfield:

This makes perfect sense in my opinion. I think it will work out quite well.

Below you will find the sales for all 66 Preacher comic books. For the first 18 issues we only have the order index as we don’t get estimated sales until issue #19. We will use a 700 multiplier for the index to generate the sales number assuming issue 18 and issue 19 are similar around 50,000 copies sold. This is one of the only modern comic books in history to double sales in less than two years; 14 issues to be exact.

END_OF_DOCUMENT_TOKEN_TO_BE_REPLACED

Elizabeth Perkins, Celia Hode on Weeds, will play Vyla Quincannon on the AMC TV show Preacher. We have learned she is, “a genteel but formidable businesswoman who owns the local slaughterhouse in Annville. Ambitious, strong-willed and terrifying, Vyla shares a past with Jesse’s father which gives her a singular hold over Jesse.”

END_OF_DOCUMENT_TOKEN_TO_BE_REPLACED

We are always interested in listening to the best podcasts available. Unfortunately, there are only a few podcasts that are focused on the Preacher comic book and/or the new AMC Preacher TV show. Over the course of time I hope to grow this list but as of now the follow Preacher podcast should whet your appetite.

Preach! – College professors and writers discuss the show and comic book from a writer’s perspective.

Son of a Preacher Podcast – A discussion with actual sons of a preacher.

Film Dispenser – An interesting take from one who has read all the comics and one that is completely oblivious to the source material.

Preacher Podcast – These guys do a really good job. They also have a Twitter account devoted to the Preacher AMC TV show.

Preacher vs Preacher Podcast – A podcast comparing the comic book to the TV show.

Talking Preacher – Pretty sure this has nothing to do with the TV show on AMC after the pilot and final episodes.

If you know of any other Preacher focused podcasts please feel free to comment below with the name of the podcast.

How Many Copies of Preacher #1 Are Out There?

If 1500 copies have been CGC graded, how many other high quality copies are still floating around? The answer is not a lot. From experience with The Walking Dead, we know that most people that have high quality copies are going to get them graded to see if they can make any money selling them on eBay or another auction website.