Over the last several months, there have been many debates as to the value of Preacher #1 and if it can surpass The Walking Dead #1. Most are adamant that The Walking Dead #1 was lightning in a bottle and it will never happen again. While this could be true, I am going to explain some reasons as to why Preacher #1 might be worth even more. 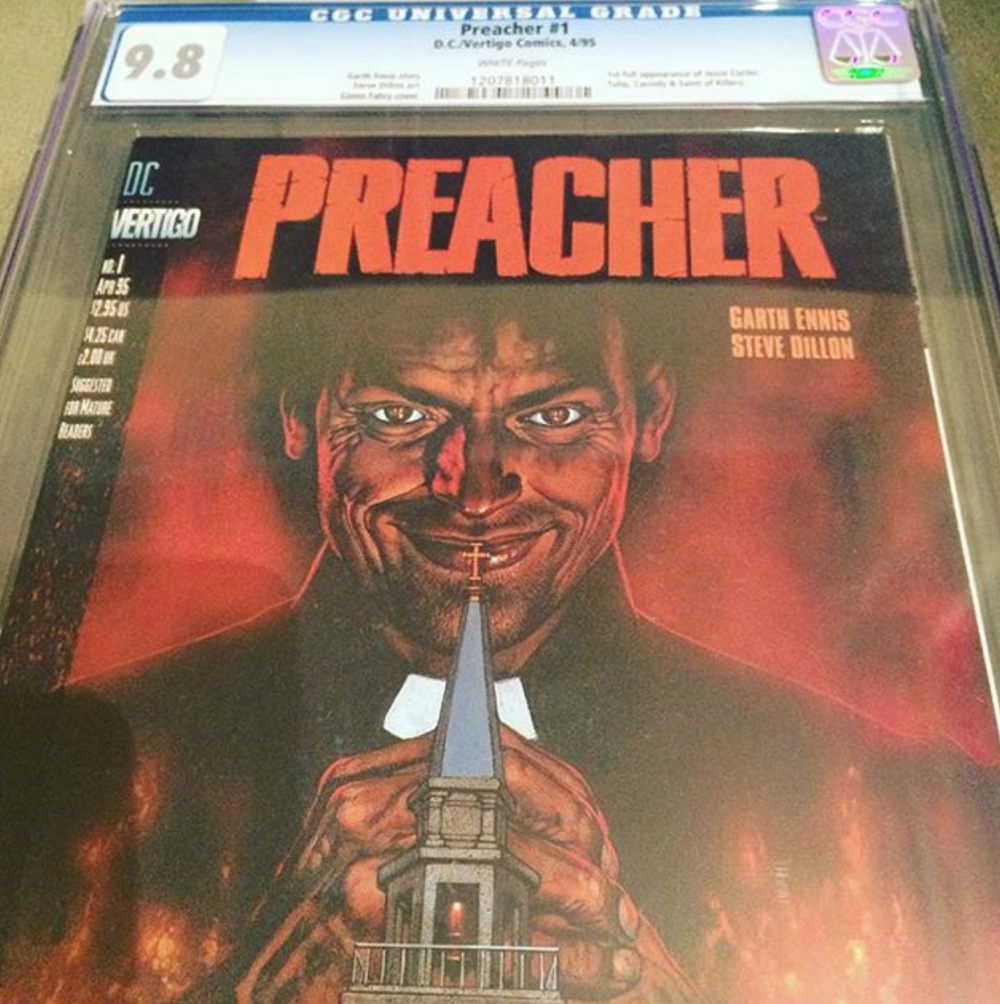 Print Run of Preacher #1 vs The Walking Dead #1

It is possible that speculators and/or collectors could have purchased The Walking Dead #1 and immediately sent it to CGC to get slabbed. This is the reason there are a handful of 9.9 copies of The Walking Dead floating around. It is safe to say there will not be a single Preacher #1 CGC 9.9. If there is, it will go for well over $10,000.

I will be the first to admit that 99% of The Walking Dead #1 copies were not immediately sent to CGC. That said, there was still the possibility to do it shortly after the comic book started to get popular; unlike Preacher.

Here is another stat for you

We must realized that everyone with a high grade copy of The Walking Dead #1 has sent it off to CGC. This is not the case with Preacher…yet. It could very well be the case that we see 1000 or more 9.6 and 9.8 copies if the Preacher show gets popular.

Personally, I don’t think it is likely the number of high quality Preacher copies will rise that much. Since February of 2016, when the show was set to premiere at SXSW the number of copies have gone up 34 for 9.8s and 37 for 9.6s. This is with all diehard fans, speculators and collectors aware of the show coming out on AMC in May 2016.

At the current pace, about 10 new copies of each 9.6 and 9.8 have come on the census each month. Even if the pace doubles it will still only be 20 graded books available for the entire fanbase.

There is no argument to be made that Preacher was the adult comic or graphic novel of the 1990s. You can see the full chart of sales over time here. During it’s peak, Preacher had over 50,000 readers every single month. This was with no thought of a TV show, movie or adaptation. When we compare that to The Walking Dead, TWD only reached 24,000 readers when the AMC TV show was confirmed in April 2010.

That means, Preacher was twice as popular as The Walking Dead in a time when the comic book industry was slumping. Add to this the fact that Preacher fans have been waiting almost 20 years for an adaptation and you have a fanbase that has been waiting for this TV show.

I would also add that most Preacher fans are income earning adults. If you read Preacher back in the 1990s you are well into your career and likely have money to spend on comic books. This is not to say The Walking Dead readers weren’t adults, but with the TV show coming out shortly after the first comic book there is a possibility that many readers were still in college or in the early parts of their career when the TV show came out.

Even with all of these numbers, it doesn’t matter if the show sucks. If it is like Constantine or Lucifer the value of Preacher #1 is going to tumble. Many fans are very worried about the show falling flat on its face. Well, the critics think otherwise. Almost every critic that has seen the first four episodes is blown away by the story. And there you have it, the ultimate reason Preacher #1 will be worth more than The Walking Dead #1 is it is a much better story. There is no argument to be made. If you have read them both, you know what is better.

If Sam Catlin, Seth Rogan and Evan Goldberg can do a halfway decent job with this story, this is going to be a huge hit. You can read all the Preacher pilot and season 1 reviews here.

How Much is Preacher #1 Worth?

The weekend prior to the premiere of Preacher we are seeing 9.6 copies around $625-$650 and 9.8 copies for right at $1000. Is this the lowest price we will see? Will Preacher skyrocket to $3000 a copy for 9.8 issues? Only time will tell, but Preacher #1 has the potential to be even more valuable than The Walking Dead #1.

Over 30 Unslabbed Preacher #1 Copies Show Up on eBay